Take a look at the below number pyramid. Does it look familiar?

This is a number pyramid with many multiple meanings we can derive from it. 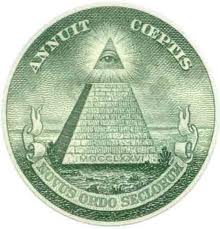 Interestingly the 0 (the female principle) reminds us of the Eye of Providence (Horus) on the pyramid that we see on the American Dollar.

You can see the same represented in the iChing, where the line that is visible is Yang (male) and the invisible line is Ying (female).

So from the invisible arose the visible which is the core concept of creation – the feminine aspect of God of which creates from nothing and gives birth to something.

There’s a bunch of phrases where YHWH (God who has spoken) is mentioned in Old Testament that give the total of 111 using Hebrew gematria. See earlier post: http://disorderlyhappiness.com/2011/12/20/the-devil-is-a-woman . Here the 111 is the bottom of the pyramid represented also as the 3rd iteration from the first (1) creation as shown above. If we count the numbers upwards from 111 we get a total of six.

Now six represents things as manifest / matter / materiality. So we can link mathematically the concept of YHWH becoming manifest (from the invisible) on the physical plane by a multiplication of 111 (YHWH) X 6 we have 666, which is the Mark of the Beast.

But what if we considered the above is in error because of the designation of feminine principle of God as absent. What if for millennia esoteric numerology assumed that the female was non existent or in other words invisible?

Perhaps this led to a major philosophical error in the assumption that before God was manifest as an entity, God was unmanifested potential energy, formlessness etc. Hence the belief that carries on even in mainstream science today that nothing / non-existence is the initial creative (feminine) impulse.

Seven represents a number of completion. It’s interesting too that there are known to be six spheres in the spirit world that are absent of God in the sense that the sixth sphere is the highest point we can progress while we are self-reliant. After which, the seventh sphere onwards are known as the spheres of heaven that are accessible only by being God-reliant or emotionally in harmony with God’s Love (Divine Love).

What then are the relationships between 666 and 777. There’s an interesting phrase from Genesis where God first spoke. In English that translates from Hebrew to:

Let there be lights in the firmament of the heaven

Using Gematria we get these numbers:

Now here’s the links to those numbers (consider the very start of Genesis – “In the Beginning”):

The number 37 is called the “Mysterious Number”(http://www.aiwaz.net/mysterious-number-37/a75 ). With the use of Gematria it appears one of the most common throughout early religious texts such as the Bible. It also has a lot of strange mathematically properties for example each permutation of any three digit numbers when added together become 37 (http://www.aiwaz.net/mysterious-number-37/a75 ). In mathematics it is too considered the first circular number (http://www.ridingthebeast.com/numbers/nu37.php ). We might say then that 37 represents the first instance of perfected harmony (circle) to derive further symbolic meaning.

So by replacing 3 x 13 x 37, with associated word meaning, we could have something of an indication of God “before” our human perception of God who we called YHWH (In the beginning).

Here is my attempt at creating a meaningful phrase from those associated words.

From the beginning the initial and perfected harmony of masculine and feminine qualities was in God and manifested in God’s love throughout His/Her creation.