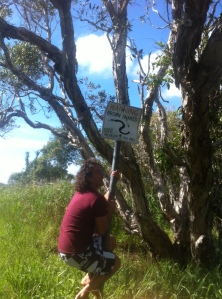 I had a conversation with my brother about real-ness. What it is and how do we know we’re being real? I don’t know if I can answer that one, but I can say something about it.

There was this book I read once called “The Game“, it was about how nerdy guys could transform themselves to becoming attractive and be able to pick up hot girls. How they’d do this was by becoming a confidently and fearlessly “unique” character.

The author of the book, Neil Strauss made an account of how he started off creating this monstrous facade that he’d endlessly experimented with and refined until he found himself success in the “art” of seduction. So he was able to manipulate a lot of women into desiring him with this fake character, which worked until he fell for a particular woman. For her, the bag of tricks he developed we’re rendered useless, because they just had no effect on her, he was perplexed and got down on himself.

It reminds me when I met Maja, my wife. I was in a pub and had this book of photos with paintings I did at art school. I guess it was like my bag of tricks, and all it really did for her was make me look sleazy. She told me later how she thought only a sleazy kind of guy would be showing off his paintings in a pub, it was an alarm bell for her, I had a better chance without the portfolio 🙂

Cover of The Game

What I liked about the ending of Neil Strauss’ book is that the girl he most liked, who was not impressed by this ultra tuned character, helped him realise that just being himself was what she was the most attracted to all along. So with all that work struggling to become someone else, he finally got that with real love what was required of him was to be himself. It makes sense because you can only really love the real person underneath while the artificial version is more like a barrier to that love.

So why do we want to be this artificial “unique” character when we are already completely unique to begin with?

I think it’s not that we just don’t believe our real self is attractive, it’s just so hard sometimes knowing what being real is in ourselves. For me I know I’m in the real me space when I’m honest, not only honest with what I say and what I do but also how I feel. Although feelings too can be faked, so there’s a lot if pot holes to fall into.

Mostly for me real-ness is fleeting, I’m there and I turn around and I’m gone. Something’s then happening that’s making me run from myself, and the only time we want to run away is when we are afraid. So in my case its when I’m afraid of what I see in myself that I run and hide.

I think the state of being real is like we’re looking at a perfect mirror. We start seeing ourselves in full view, and that includes the ugly bits, and then we try to cover them up. So in a sense we’re not just trying to seduce others with a fictitious character, we seduce ourselves along the way as well. It’s easy then to see how as a society we’re easily seduced by things like the media, the government etc. because we’ve done much of the self seducing already, and then its simply a matter of a few adjustments in the needed direction to put us under a mass spell.

When I really believe in my own self seduction, when its at its height that is, I can become this self important person, so seduced by my pretend image, its hard to see myself. I get like that, especially when I’ve been through periods of my life when the fake me seemed like it was getting attention, when I got all convinced about my unmatched vision of the world, my creative flair, my this and my that, and my addictions to recognition and attention we’re getting fed, oh I was a spectacle! Funnily that’s about the time when I was walking around with my portfolio in hand. I’m so glad my love saw past those layers of crap, it must have been difficult!

If love is not in our life, like for me when I turned my back on the best mirrors I’ve experienced, God and my wife, it was a slower process. Its like my masks we’re getting weathered by just living life even while I was holding tight to denial, but the cracks eventually started to appear. It’s fitting then those Leonard Cohen lyrics: “there’s a crack, there’s a crack in everything, that’s how the light gets in…”

In the not too distant past I chose to discard what I thought was hard. I turned from God long ago, and left my wife for a period and although things seemed easier for a time this empty feeling was just taking over me, and I was just reaching more for soothing, by spending more time with people that didn’t challenge me but gave me nice feelings, like lullabies to help me stay in my slumber and I too sought more for chemical and physical soothing when that wasn’t enough. My heath and wellbeing very quickly took a sharp turn and the cracks where appearing all over the place. I cried once of such a long time in a car because of the loss I felt for having discarded what was true – my real love, Maja and my real feelings for her.

I spoke with her recently and said that sometimes I look at myself and I wonder if I have the capacity to truly give. See, I have a bunch of masks, some I know and some I’m not so aware of and this one has to do with me being this nice guy, even though many times I’m not. With that one, I sometimes feel like I’m only motivated the “good boy” disguise, that I question if any of my “good” nature is genuine at all. Am I actually able to give from myself without strings attached? I sometimes doubt it, but the doubt for me is also a seduction because I might be “good” but not “good enough”, so it’s the unworthiness thing that’s another cover for pain inside but all that’s just speculation. There’s a lot for me to feel real about there.

What is really helpful for me though is to know that someone who loves me can see what’s behind my disguises, because she sees what’s sincerely good in me, even when I can’t and likewise I do in her. So we can really help each other through the process of getting to see our real selves too. I believe that’s one of the great gifts of real love. I’m really happy I can see that now.

Its like that with God as well I believe. God has got to be the most perfect mirror, because God could only love us and couldn’t love our masks for a moment. God couldn’t possibly be seduced by all of our well honed charms. It’s like imagine if I loved my daughter’s clothes over her, that would be the same thing and that would be weird. God is not weird 🙂

How could the being that created us love are masks over our real selves? It makes no sense. So feeling close to God could only happen when we’re letting ourselves be close to our real selves at the same time, anyway that has been my experience thus far.

9 thoughts on “How to be real”