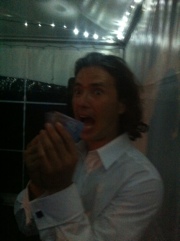 I haven’t written here for a little while, it’s just that I’ve been sort of caught up in day to day things, like finding a new job, like making ends meet with a one income family, like getting from interview to interview at the tail end of my exhausted fortnightly salary. Lately things feel like I’m in a transition of some sort. What I mean is the routine is kind of coming out from the seams.

Today for example, I got stopped by police for going out a train gate without a ticket. I left the ticket at work, at least I think that ticket would have got me through, because it was a return ticket used only once but I didn’t have it anyway and I got a big fine, I think it’s in the vicinity of $300.

I didn’t have any ID on me too and if I wasn’t on their database, they told me they could put me in jail, until they could verify who I was. That doesn’t really seem like a just consequence for the action I performed – being incarcerated and fined for using the train and not carrying a train ticket or having ID. I mean, I wasn’t directly harming anyone and being locked up as a result has to be a frightening and somewhat harmful experience for myself. A somewhat skewed measure of justice, the scale is well tipped over.

In any case I was rushing to an interview with no money in my pocket and when I got there I was telling the recruiter that an $100k annual package job wouldn’t be enough. The truth is, that salary on it’s own in Sydney with 3 mouths to feed and an overpriced rental market, is very tight. What’s strange is only 5 or so years ago $100k was like top dollar. So what happened?

The cost of living just goes up and up and basically makes the poor, poorer and squeezes whatever is left of the middle class. Logically that’s got to have an effect on small to medium business, because with less disposable income, less people overall can purchase stuff and it seems counterintuitive if we really want to stimulate the economy. I mean it might seem simplistic but wouldn’t an economy function better when it’s moving, when goods and services are being exchanged by more people, not less people.

Anyway, I’ve had a bit if a moral dilemma. I know this blog is not really au fay with many or at least falls outside of what’s culturally accepted as a personal interest thing in the professional / business space I am employed in. I don’t go advertising it except the occasional post on Facebook linking here, but I don’t hide my identity here either. Now being that myself, not so long ago was in the position of hiring staff, I often did a bit of background googling of prospective employees by just seeing what would come up searching for their names. It’s fairly common practice nowadays, so I know I too would be scrutinized in the same manner. It is quite possible after looking through my CV or interviewing me, the same people will be reading this and may decide that my interests and leanings make me a person who is not a good fit for their company. What might happen then is I’d potentially lose an opportunity to work in a job I’d really like and work well in – vice versa too.

I did remove my “about us” page as I thought it pigeonholed me even further, being that I mentioned God and love and other things that is, in our current time. synonymous with being a nutter or an air head at the very least. I must admit, I’d in the past have the same opinion too.

But overall when deciding whether or not I’d take lengths to hide myself to stay in my mind competitive in the job seeking market, I have to go back to my original intention behind putting my thoughts and feelings here on this blog.

The original intent was always to present myself and my personal journey of seeking real meaning in my life from what I understand that to be and remain transparent about it, even when that scares me. In other words to attempt at least in some small way to remove my facade and to show the dirt and hopefully the diamonds I’d find there too. So, when I think about that, I can’t verily go back and rebuild a new facade without feeling that I’ve let myself down and trust me, often I do feel that way, so I can’t imagine the real long term or even short term benefit of adding to that feeling. Interestingly, how much better can you imagine, would a person be at any given task, while that person had his or her full or at least fuller self and attention on the job at hand. It takes energy to hide, energy to maintain a facade, energy better used on something more productive, I believe.

Well for now, all I can do is wait and see.