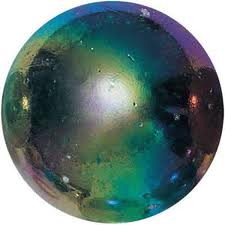 One day a little girl was playing with a small green and blue marble ball looking up to the sky. She wondered who made the sky so amazingly blue.

Suddenly, a white bird few above her flapping it’s wings and hovering almost at arms length in front of her. She closed her eyes and reached out to touch the bird and when she opened her eyes again she was somewhere else.

She looked around her surroundings of shiny blue an green and it seemed to her that she was in the same marble she was only moments ago playing with. She couldn’t understand how it happened but she knew
it must be, as here she was.

Inside the marble was beautiful. It was full of blue lakes, green tall trees and rolling green hills. She could even see the sun shining through the glass on the furthest reaches of the marble ceiling that made up the sky inside. It looked almost as high as the clouds but strangely it felt close to her too as if she could even touch it if she wanted to.

When she looked at the ceiling she saw a reflection of light moving along the surface but she couldn’t see where the light was coming from or whether even it was from inside or outside.

For a moment she missed her mummy and daddy and even though she felt she was in a magical and happy place she wished they could be here with her. When she thought about this she saw the light moving towards her and then she wondered if somehow it was the bird. It’s possible she imagined as she could be sure that things where very different inside the marble than outside.

It was a very soft light hovering towards her but at the same time it was bright because everything that it passed shined even when far away. It was as if this light made everything it touched come to life.

Soon she could see that something was inside the light and it wasn’t the bird but a man who smiled at her like an old friend. The man spoke to the her not so much with words but directly to her feelings. She knew she could understand him and always wondered why people never used feelings to say things because it was so much easier.

The little girl realized then that the man was indeed her old friend, he was with her from the moment she came into the world and it was his job to help her in whatever way he could. She felt too that he loved her very much as well as loving her mummy and daddy as everyone else in the world. Because he knew her well, she understood now it was why he showed himself first as a bird then a light, just in case she would be frightened.

He was also glad she could see him inside the marble so he suggested that she carry the marble with her and whenever she felt alone or if she wanted to ask him anything at all, she could look into the marble and she would be here again. She wondered what it was that brought her here this time as she didn’t feel alone to which the man reminded her of her question about the sky and he told her he would very much like to answer that if she would still like to know.

She would she told him, so then he began.

“Before the sky was made and before any other people were around there was one who loved you so much”, he told the little girl.

“This being loved you so much so that she wanted everything made completely perfect for your arrival. So she prepared it all as a gift for you. She made the stars and spread them across the whole universe so you could know that there would be no end to the treasures of your life. She made the sun so you might see how love gives light and makes everything come to life. She made the moon so in darkness, you’d know that light always comes to you in reflection. She made the mountains, the forests, the rivers, lakes and oceans, in fact everything was made as your life’s playground to discover and enjoy.

She then made all the animals and plants so you could see how life is always full of variety and possibilities. After that she made other children like you to share your experiences together and she made two specifically to be a mum and a dad for you, so they could nurture and guide you as you grew. And as she loved all her children so much, she gave each one the ability to choose whatever they wished to do”

“What we choose wrongly?” asked the little girl.

“We’ll in case it happens that any of us gets lost” said the man “she made every single thing, just like your blue and green marble as a guide to help us find our way back home. All we have to do is really really want to know and all the answers we hope for will be given.”

“So why did she make the sky blue?” asked the little girl.

Then the man smiled and said to her “She colored the sky blue as she knew that one day you might look up amazed at it’s beautiful colour and wonder about who made it so.”

“Because she wants more than anything for you to know her and feel her love, as she hopes that you too would like to meet her as much as she hopes to meet you.”

2 thoughts on “The little girl and the marble”